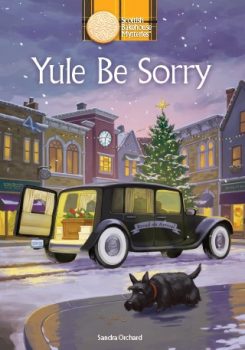 On the first day of Christmas, Molly Ferris’s true love gave to her . . . one of many anonymous pranks leading up to Loch Mallaig’s upcoming Yule Festival, an annual tradition celebrating the Michigan town’s Scottish heritage. Initially, Molly and her best friends, Laura Donovan and Carol MacCallan, are charmed by the silly “Twelve Days of Christmas” gifts showing up at their Scottish bakehouse, Bread on Arrival. However, the fifth day presents ghastly tidings—the murder of local real estate agent Eric Wright, who’s found dead with five golden rings on his fingers.

Discovered by the bakehouse’s new delivery boy, whose girlfriend’s family was facing the loss of their home for the holidays, Wright’s homicide soon engulfs the entire village in suspicion and conjecture. With a history of shady deals, the murdered Scrooge had a seemingly endless naughty list of people who could have killed him—and perhaps it was someone Molly and her friends know and trust.

With their business’s wellbeing threatened by their ties to the murder, the Bakehouse Three resolve to solve the mystery of who silenced Wright’s night. Soon, the three Scottish hens realize that not only is their livelihood at stake but their lives as well. They must uncover the murderer before the killer gets to them—otherwise, they might be three bakers-a-dying.

About The Scottish Bakehouse Mysteries:

Join former college roommates Molly Ferris, Laura Donovan, and Carol MacCallan as they reunite to open a bakery in bonny Loch Mallaig, Michigan, a place where the iconic sounds of Great Highland bagpipes fill the air, kilts never go out of fashion, and mysteries surface with curious regularity. Undaunted when they discover that the only retail space available in the charming Gaelic town is a former funeral parlor, party planner Molly, NYC chef Laura, and retired math teacher Carol bravely fire up the Scottish bakehouse of their dreams, Bread on Arrival, in the old Victorian mansion.

Powered by friendship, moxie, and plenty of tasty Scottish treats, the Bakehouse Three tackle every challenge that arises—including unsolved murder. From rekindling auld alliances and sparking new ones to chasing cryptic clues wherever they lead, the fiftysomething women prove that it’s never too late to embark on a fresh adventure. Pour a cup of tea, nibble on some shortbread, and get caught up in the mysteries of Loch Mallaig!

Click to learn more about the Scottish Bakehouse Mysteries Bookclub from Annie’s Fiction.