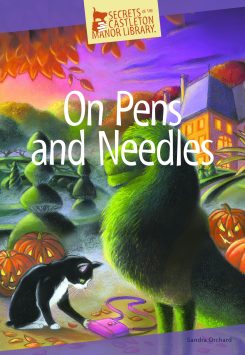 One Pens and Needles is now available in

audio, as well as, hardcover and Ebook.

I had so much fun writing On Pens and Needles set in a luxurious mansion (think Biltmore and the Breakers estates) on Cape Cod that hosts retreats for writers and book lovers. If you enjoy cozy mystery series, I highly recommend you subscribe to this intriguing multi-author series at AnniesFiction.com

About On Pens and Needles:

The spine-tingling scene is set at Castleton Manor in Lighthouse Bay, Massachusetts, when the grand mansion plays host to a retreat for horror writers and fans. Librarian Faith Newberry feels unusually ill at ease about the event celebrating frightening stories, and all the talk of superstitions and bad omens makes her apprehensive. Her sense of foreboding only grows when the retreat organizer devises a series of hair-raising stunts to keep the guests constantly on edge.

But then something happens that no one could have predicted. One of the stunts turns deadly.

As Faith and her friends in the Candle House Book Club investigate the suspicious death, another mystery develops. Horror novelist Pierce Baltimore becomes the victim of pranks inspired by his latest book. The writer made many enemies during his climb to the top of the best-seller list, so is someone seeking revenge? Or are the pranks just part of the retreat’s entertainment?

Join Faith and her friends—including her dedicated cat, Watson—as they roll the dice on these two mysteries. Will they be able to solve them both before Pierce’s luck runs out?