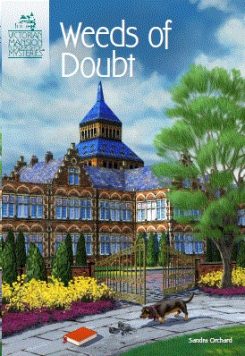 The Victorian Mansion Flower Shop series is about mysteries encountered by a former forensics botanist professor who takes over her grandmother’s flower shop on Orcas Island in Washington State.

In Weeds of Doubt, Summer is winding down and florist Kaylee Blue and the other residents of Orcas Island are planting fall flowers and preparing for another bustling autumn tourist season. But Kaylee has a full course load. Turtle Cove High School’s most beloved teacher has retired and is about to move off island, and mild-mannered school librarian Wilma has begged Kaylee and the other members of the Petal Pushers garden club to help her assemble a last-minute class reunion so that everyone can say goodbye before he leaves town.

Kaylee will have to do some old-school detective work if she’s to mow down a murderer–before someone else becomes dead of the class.