I know, I know, it’s only September, still 3 months and 3 days until Christmas! But…

one of the ways I treat my overworked brain at Christmastime is by indulging in a month-long fest of reading Christmas themed romance novels and novellas. I start collecting them as soon as I find them and I decided that this year, I’d share some of those finds with you. My first is… 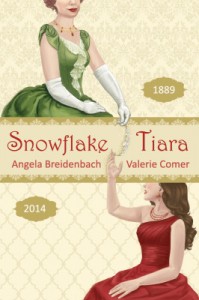 This is a Christmas romance, with two books in one, celebrating Montana’s 125th anniversary. They both have the same great hook:

What if you were caught doing something good, but the man you loved didn’t see it that way?

Now usually, I collect the Christmas novellas I find and save them for December, but I actually read these two novellas while traveling earlier this month. They were a fabulous way to fill in all those hours between flights. They are both set in Helena, Montana, and center around a fictional beauty pageant–the first a hundred and twenty-five years ago, and the second this year.

In the first novella: The Debutante Queen by Angela Breidenbach ~ 1889 (Helena, MT)

Calista Blythe enters the first Miss Snowflake Pageant celebrating Montana statehood to expose the plight of street urchins. But hiding an indentured orphan could unravel Calista’s reputation, and her budding romance with pageant organizer, Albert Shanahan, if her secret is revealed. Will love or law prevail?

I’ve got to admit that I was so swept up by the historical details that I was convinced that Angie and Valerie based the books on a real event. But Valerie has since told me that no, the event is completely fiction, although Helena was the wealthiest city in the world per capita in 1889 (thanks to the gold rush), so it’s not too big a stretch that someone may have considered something of that nature.

The Debutante Queen mentions the first recorded American pageant in Delaware, which took place a few short years before 1889. While her heroine and hero, Calista and Albert, are fictional (as is his inn), many of the other characters and locations and historical tidbits are real.

In the second novella: More Than a Tiara by Valerie Comer ~ 2014 (Helena, MT)

Marisa Hiller’s interest in competing in Miss Snowflake Pageant for the city of Helena’s 150th anniversary is at zip, zero, zilch when she discovers the official photographer is former boyfriend, Jase Mackie. Can Jase make amends for past mistakes and offer her, not only a tiara, but a partner in her crusade to help needy children and families?

True to her farm lit roots, Valerie does a fabulous job of marrying two seemingly incompatible worlds, that of farmer and beauty queen. I love how she weaves in her own personal passion for local grown produce.

I asked Valerie what inspired their collaboration on Snowflake Tiara 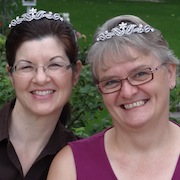 Here’s what she had to say: Angela entered pageantry as a means to develop her platform as a speaker and author. Being Mrs. Montana International 2009 has expanded her opportunities to speak on an increasingly wide basis, which is something Angie loves to do!

I, Valerie, have never entered a pageant, nor played a contestant on television. In fact, I grew up a little Mennonite girl in a traditional household, where beauty, elegance, and grace were not celebrated. Writing More Than a Tiara (my novella in Snowflake Tiara) gave me opportunities to internalize God’s views.

We hatched the general idea of writing a novella duo together several years ago, but agreed immediately we’d only do it if the stories fit both our brands. Angie loves turn-of-the-century Montana, and I love to write farm lit. It took several Google hangout sessions before we narrowed in on the pageantry themes with my character’s platform centered on real food. Focusing both novellas on children in need, both in Helena and around the world, further pulled the stories together.

As we worked back and forth, brainstorming, sharing snippets, critiquing, and editing, we were able to tighten the connections between the stories and themes.

We’re both delighted with how the stories developed, and are thankful that our readers are enjoying the collaboration as well!

Sandra, again. The stories are fun and I wholeheartedly recommend this unique pairing for my blog readers’ Christmas reading list.

This book is available in print, but is under $4 on Kindle. Learn about other novels by these talented authors by clicking on their names above the book image to link to their individual websites.

Your Turn: Do you like to indulge in Christmas-themed books or movies as the season approaches? Or crafting or decorating? 😉