Everyone has one or two. Right? 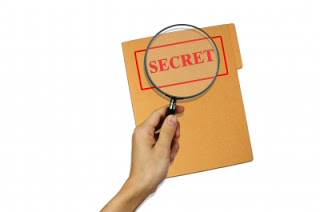 In fiction, a character’s secret is a wonderful catalyst for unexpected twists or added tension, because its revelation will have (at least in the mind of the secret-keeper) catastrophic repercussions.

In my first novel, Deep Cover, the reader is in on the hero’s biggest secret–he’s an undercover cop–right from the outset. Keeping this secret from the heroine creates tension on several levels–in the investigation, in the romance, and on an emotional and spiritual level.

Of course, I love keeping secrets from the reader, too. The biggest being who dun it. But I usually have one or two others that throw little twists into the story.

Which brings me to my current dilemma. While revising my next romantic suspense manuscript, I realized that the hero’s sister let the heroine in on his secret in chapter two.

I had my reasons.

And there is more to the secret than the sister is aware. But…

It does pull the punch of his later reveal.

And it was bugging me.

The most obvious solution would have been to nix the earlier revelation, but I didn’t want to do that. I decided to turn the revelation on its head. Make it inadvertently cause her to reveal something, too–her doubts about God’s goodness.

She doesn’t blame the hero for what he thinks he should have prevented. She blames God.

After all, he’s, well, God! If he wanted to stop the tragedy he could have.

Trouble is I’ve written myself into a black hole. There’s no reasoning a person out of that emotional state. Is there?

I spent pages and pages trying. Crumpled them as being far too preachy. Because it pretty much comes down to believing that God is good despite the tragedy, that He loves you more than you can fathom, and that He wants you to find rest in His peace. And that peace, when you find it, seems to defy explanation.

Your Turn: What would you say to someone who asks how you can still trust God when your life derails?

Image courtesy of basketman at FreeDigitalPhotos.net