Ever notice how things seem to happen in threes?

Well, I have 3 things to share with you today.

First of all my super-exciting, big news that I’m finally allowed to disclose!!

Revell Publishing has given me a three-book contract for a romantic suspense/mystery trade-length series. This was a series for which the proposal was submitted in June 2010, so aspiring writers…don’t give up hope!

The first book will release in June 2013 and is guaranteed to change the way you look at flowers.

This series is very dear to my heart. Book one was called Murder by Marigolds. I say was, because that title makes it sound like a cozy mystery, which it isn’t. So we’re in the process of brainstorming new titles.

Although… it does feature a herbal researcher-turned-amateur-sleuth as the heroine. The romance and an underlying suspense plot overarches the series, while each book features a standalone mystery. I’m very excited about having the opportunity to develop my characters and several subplots more deeply with the longer format.

Nothing is at it seems in this rural Niagara-area town!

Readers who haven’t snagged a copy of my latest release...I believe my host is generously giving away a copy to one of the commenters on today’s blog!

Third: This news is also for aspiring writers. I highly recommend you check out the Touched by Love contest. TBL is the contest of the Faith Hope Love Chapter of RWA. You don’t have to be a member of RWA to enter.

I coordinate the historical category and so far we only have 3 entries! The entry numbers for the other categories are low, too. A contest win or final is a great boon to a proposal. And this makes the odds in entrants favor!

Lynette Eason mentioned that she received her first LI contract as the result of a request following the TBL contest.

The deadline is midnight, this Sunday April 1st. Almost all the judges are published, the winner of each category wins a read from a Bethany editor and cash!

Here’s the link: http://www.faithhopelove-rwa.org/tbl.html  The entry consists of the 1st 30 pages of your ms and a 2-page synopsis.

Your Turn: Do you have any news to share..in threes or otherwise

Thank you to everyone who joined our conversations this week.
The winner of the signed copy of Highland Hearts is “Jennifer” (whose husband was injured).
Congratulations!!
Please email me your mailing address and I will get the book to you.
If you’re in the St.Catharines area, Saturday, March 24th, stop by and say hi to Eva and I at Heritage Christian Bookstore in the Grantham Plaza.
We’ll be signing books between 1 and 3 pm. We have more prizes to giveaway!!
OTHER GIVEAWAYS STILL ON:

Leave a comment at: http://lenanelsondooley.blogspot.ca/2012/03/shades-of-truth-sandra-orchard-free.html
for a chance to win Deep Cover
Friday (today) is the last day!

The following bloggers are generously giving away a copy each of Shades of Truth, stop by and leave a comment for a chance to win, or feel free to pass on the news:
http://jessicanelson7590.blogspot.ca/2012/03/reviewing-shades-of-truth-by-sandra.html
and
http://secretsof7scribes.wordpress.com/2012/03/18/sandra-orchard-shares-about-shades-of-truth-and-a-youth-detention-center/
I wish you all a fabulous weekend!

Shades of Truth has officially released and it should be in stores by the weekend!!!

What does that have to do with writing off the deep end?!

Allow me to introduce my fellow Wodians. So named for our writing group: WODE–which stands for Write Off the Deep End. 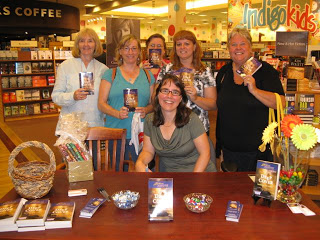 Readers and writers alike often ask me about my writing process. These ladies are a big part of it. Once a month we get together to offer each other feedback on what we’ve written or to brainstorm new story ideas.

The group “found me” a few years ago after my RWA magazine was delivered to the wrong house. (Divine redirection!) The recipient was so excited to find another writer in our community that she hand-delivered the magazine and invited me to the next WODE meeting.

She has since become a treasured critique partner. Remember the grocery store murder discussion from January? That was with her. 🙂

In honor of the positive impact WODE has had on my writing career, I used the “word” WODE in Shades of Truth.

Your mission, if you choose to accept it, is to find the location and email me the page number (and book version). 🙂 In June, I will draw from a hat the name (of all correct answers) and they will receive a $25 gift certificate for their favorite book retailer.

Your Turn: Do you have a special friend or group with which you share a common interest or hobby or pursuit?

Today, I’m a guest at Lyn Cote’s blog Strong Women, talking a bit about the ministry behind the real Hope Manor, which inspired my fictional youth detention center in Shades of Truth
And
This week…I’m the featured author at American Christian Fiction Writers.
I had fun with one of the questions on the interview–and would like to hear your answers?

Your Turn: What’s one piece of trivia that most people people don’t know about you?

I know, I know, I usually don’t post on Thursdays, but…it’s just too exciting to wait.

Shades of Truth won’t be in stores for another 40 days, but it is available NOW from the Harlequin website at 20% off the cover price!!! And I have special coupon codes to save you even more…

For regular or larger print copies, click here, choose the version you want and use coupon code SAVE10AFFO at checkout to save an additional 10%

if you’d rather stock up on your favorite titles, use coupon code BUY2AFFO to buy 2 titles and get one free. Shipping is always free for 1st time customers, or for purchases over a certain amount

if you want to stock up on other titles, use SAVE5DOLLARS to save $5 when you spend $15 on Ebooks.

Before we delve into examples of how my undercover cop hero (or you) might tell if someone is lying, I must warn you that it’s not a good idea to tell others about their signs of deception.

An intelligent liar will merely use the information to throw you off the next time. Hmm, now that might be an interesting plot twist!

On to the examples:

1) Frequently pausing before answering questions (if this is not a normal speech pattern) can be a strong indicator of deception, while stuttering or mumbling are generally not reliable indicators.

2) Nervous laughter might be a sign of evasiveness, or it might simply be a release of stress. But a single deep sigh after a subject has been uncooperative, often signals a readiness to confess.

4) Contrary to popular opinion, using the eyes to identify deception is unreliable. There are a lot more variables at play in whether someone frequently breaks eye contact, or moves their eyes in a certain direction.

5) Of course…since #4 is a popular belief, a liar may go out of his way to maintain eye contact to convince you of the truth of what he’s saying. An interesting observation I might use in my next cop story. *grin*

6) The movement of a person’s body away from you (often toward the door) is a strong indicator of deception, especially if accompanied by other cues.

7) Bargaining. “I was keeping up with traffic, not speeding.” Or a politician may have “misspoke” or been “quoted out of context.” These are all examples of attempts to disguise reality.

8) Attempt to remake the interrogator’s image of him, for example, by saying, “I’m a veteran.” or “I’m a faithful husband.” or “I’m a good employee.”

10) There are many more examples (and cautions) in the book, but I’ll end with the use of blocking statements. Example: “Why would I lie about something like that?”

Your Turn: Can you think of a memorable line or action you’ve seen in movies or read in books where someone is lying?

Like Lie to Me when they’d point out a “tell” then flash clips of famous politicians who’d been caught doing that very thing, such as Clinton touching his nose during his testimony about Monica Lewinsky.

Giveaway Notice: Kav has posted a fabulous review of my March release and is giving away a copy to one commenter this week, plus a copy of a January LI book of their choice! Here’s the link:  http://bestreads-kav.blogspot.com/2012/01/shades-of-truth.html

This week I got my first glimpse of the cover of the second book in my Undercover Cops series. It release in March 2012 and appeared on Amazon this week for preorder! 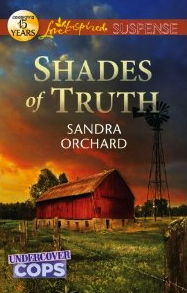 What do you think?

The book centers around a youth detention center called Hope Manor that is surrounded by farmland. I like how the artist has captured the mood.

The final gift package on the fundraiser for Sandi Rog blog goes up today  at noon Mountain Standard Time TODAY. And it’s a doozy. For as little as a $5 donation, you could have a chance to win…

PACKAGE 15: Writing 3 ($125+249=)—Open to international participants!
A free Jerry B. Jenkins Christian Writers Guild Webinar and a 2500 word critique by a guild member (http://www.christianwritersguild.com/) AND a Fiction Writing Master Course by Janice Thompson.

This is a gold mine of information! Ten lessons– each presented in video, audio, and print format so you can interact with the material in whichever way suits you best–cover every imaginable facet of fiction writing, from plotting, point of view, and characterization to theme, genre, common mistakes, and what to do with that manuscript once you’ve typed “The End.”