Today’s post is short and sweet, because I’m working like crazy to finish the first draft of my next Love Inspired Suspense. But…

I wanted to celebrate with you the fun news I heard this week about my October release Critical Condition.

For those who have read the Undercover Cops series so far, this book has Zach (introduced in Deep Cover) as the hero.

The 4.5 star rating is described as a fabulous read, a keeper–their second to highest rating.

But what was even more thrilling for me was how the reviewer described it:

“Well-developed characters and fast-paced action will keep readers fully engaged in this wonderful tribute to spouses struggling with a loved one’s illness.”

The hero lost his wife to cancer eight years ago and now has to work undercover in a hospital to stop a killer. The suspects include several medical professionals involved in experimental and alternative treatments.

The reason I soooo appreciate this reviewer’s description is because I wrote the final draft of this story after losing my dear writing friend to cancer and dedicated the story to her husband who is the kind of hero I imagined Zach being.

Your Turn: Would you like to help me spread the word about this upcoming release?

Share this post on FB or G+ using the icons below the post.
If you’ve already read the book (through Hqn), please consider posting a review on Goodreads or your favorite online retailer. (Note: some, like Amazon, don’t allow review posts until the book releases October 2nd)
or…
Visit the book, or others in the series, at your favorite online retailer and click the “like” button. With Amazon this only works if you’re signed in (ie. have an account). With Barnes and Noble and CBD.com, you can “like” using FB or G+ social media buttons.
Clicking the photos in the sidebar, takes you to the books on CBD.com (Christian Book Distributors)
Thank you so much for visiting my blog today and helping me celebrate. It is my dearest prayer that this book will inspire you to cherish the gifts of each day and open your heart to new possibilities.
Have a fabulous weekend!


Lying is pretty much part of the job description. Whether they call it misleading, hedging, evading, fabricating, falsifying, distorting, misrepresenting, or spinning the truth, it’s all deception.

Since I’m working on a fourth book in the series (fingers crossed), I thought I’d read The Truth about Lying by Stan B. Walters, a provider of interview and interrogation services, as well as, training to business, industry and law enforcement agencies throughout the U.S. (He’s also known as The Lie Guy.)

I figured it would be a great resource from which to glean little “tells” that my cops can notice in suspects that are lying to them, not to mention, those my hero might exhibit while interacting with the heroine.

But the book has so much more–information you might like to know when that car salesman says this is the absolute best deal he can give you, or when your teenage son swears he’s never touched drugs.

Wednesday I’ll share some of the “tells”. Today, I want to share the key factors that exist when lying takes place: choice, ability and opportunity.

Choice – The person chooses to lie to either gain reward or avoid punishment, or because he’s unsure of the consequences of admitting the truth. The more that seems at stake, the more compelled he’ll be to lie.

Opportunity – this is the only factor under the interrogator’s (or parent’s or shopper’s) control. To avoid being lied to make it unrewarding. If you can spot and challenge lies as they occur, the liar may be less likely to try again, or he may show more signs of deceit, thereby exposing himself.

Which brings us to an interesting topic of discussion: What’s our own role in encouraging deception?

As Mr. Walters says, no matter how good we get at detecting a lie, we’ll set ourselves up to be lied to if people are afraid to tell us the truth.

Your Turn: These questions are from the book. Please share what you’re comfortable with, perhaps examples from your own teen experiences or raising your children or buying that used car. *grin*

Do you make it difficult for people to tell you the truth as they see it because you react emotionally? Do you violently express hurt feelings? Are you easily offended? Do you punish your children if they admit they’ve done something wrong? 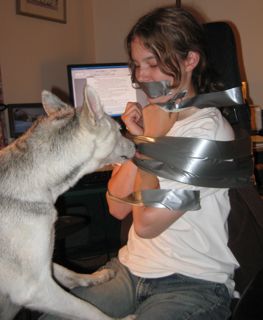 Let me start by assuring you that I DID NOT duct tape my daughter to the chair. Honest!


And isn’t Bella a true hero–um, heroine–to try to free her?


Before I tell you what’s going on at the whacky author’s house, I want to give all of you a chance to guess. Let’s have some creative fun.

Your turn: What do you think is going on?


Then…join me tomorrow at Jaunty Quills where the answer will be revealed, and one lucky commenter will receive a signed copy of Deep Cover.

Also until Sunday, at Margaret Daley’s blog, tell me what undercover cop assignment you would find most intriguing to read about for another chance to win a copy.

Thank you to all who shared their hilarious pet stories over the weekend. Today, we’re going to talk about a different kind of character, or rather character trait. Being honorable.
I think it’s safe to say that most female romance readers, as well as the heroines that populate romance novels, long to fall in love with an honorable man.
My dictionary defines honorable as “having or showing a sense of what is right and proper; honest; upright: It is not honorable to lie or cheat.”

Ouch! Not looking good for Deep Cover’s hero Rick Gray, an undercover cop who’s obligated to keep his true identity, occupation and purpose from the heroine Ginny, a woman who esteems honesty above all else.
Rick likes Ginny, really likes her, and desperately wants her to see him as honorable. Each Love Inspired book has a scripture quote before the title page. For Deep Cover, it reads ‘There is nothing concealed that will not be disclosed, or hidden that will not be made known.’” Luke 12:2
For most people the verse is an uncomfortable truth, whereas Rick longs for the day he can disclose his true life to Ginny. The day she will finally understand that he works for a greater good. The day she will know he’s honorable.
Rick holds to the maxim that the end justifies the means. But as an undercover cop, sometimes those means are contrary to God’s Word.
It’s an interesting dilemma, don’t you think?
For Rick, feigning to be someone he’s not in order to bring a bad guy to justice is not the problem. Perpetuating the lie with a woman he cares for—for the sake of the case and her own protection—is.

But the bad guys need to be stopped. And he’s working within the law to do that. He’s doing his job. Yet, his conscience is torn.
I asked Lee Lofland, retired police officer and author of the suspense writer’s must-have book Police Procedure & Investigations, to give us his perspective on the dilemma. Here’s what he had to say:
A cop’s job is certainly a tough one, and all one has to do is watch the evening news to see why—shootouts, car chases, kidnappings, robberies, murder, and, well, you get the idea. But there’s a private side to law enforcement that not many people see. And that’s the side where an officer must sometimes push his/her core beliefs aside to get the job done.
An undercover assignment can have a negative impact on officers who try their best to keep their faith intact while working in an extremely faithless environment. After all, working undercover often means having to take on the guise of an immoral person. And some real-life cops have found themselves in a genuine struggle trying to separate reality from their make-believe undercover world.
Officers like Rick Gray, who protect others at all costs, eventually rise above the rest. They’re the officers who take their oaths seriously. Sure it’s a tough job, and it takes a tough person to do it, but isn’t toughness a trait of all heroes?
Thanks, Lee. Speaking with officers to research for this story, and participating in the Writer’s PoliceAcademy that Lee organizes, and writing Rick’s story, has certainly given me a broader appreciation of the emotional havoc law enforcement officers sometimes face.
Your turn: What do you think? Is it possible to be a man of honor and live a life of lies?